VOTE the Monster out of the White House 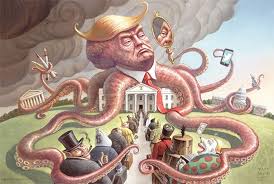 We are at a pivotal crossroads, approaching an election for which the deciding vote will make or break the future of our country.  I have never used my business to address my political opinion, but times are different now, very different.

We are facing one of the worst pandemics in history, over 200,000 people have died and the number is rising.  Children are being homeschooled, college campuses are empty, and the economy a disaster with businesses closing their doors daily.  Families are on the verge of homelessness and mental health issues are soaring.

Over the past week, an average of 45,660 COVID cases were reported per day.  More than 7,623,800 people in the United States have been infected and at least 212,400 have died.  Yet our president chooses to treat this pandemic like an annoyance, ignoring medical experts, mocking mask-waring citizens, and describing COVID as a flu-bug scenario.  Trump is putting everyone around him at risk, everyone connected to those people at risk,  and everyone in our country at risk.  He is irresponsible, ignorant, and completely lacking of the ability to  lead in any way, let alone lead our country.

Following his release from Walter Reed Medical Center, Trump is back at the helm and recovering.  He remains under the influence of COVID treatment medication which includes dexamethasone.  Assistant professor of medicine and infectious diseases at New York University School of Medicine, Dr. Celine Gounder, indicated that “…while this commonly used drug is generally safe, there are a range of known side effects. By far, the most common is hyperglycemia, so that’s where your blood sugars will shoot up,” Gounder said. “Also quite common, especially among older patients are a range of psychiatric side effects,” she added.

So in addition to all of the existing and highly disturbing character and personality traits of  our leader, now exists the possibility that he is running our country – during an unprecedented time of crisis – with a psychotic state of mind. Beyond scary.  Based on the comments Trump made the past few days, including this week’s highly disturbing Fox Business Network interview, it is hard to doubt the anticipated side affect of psychosis has not kicked in – in fact, it appears to be on rapid free flow.

Trump further told reporters that catching coronavirus was a “blessing from God” and portrayed the unproven therapeutic drug as “a miracle” he was given after testing positive for the virus.  He said that he planned to make the antibody cocktail, being developed by drug maker Regeneron, free to anyone who needs it.  Regeneron does not yet have government approval, and Trump of course did not explain how exactly this free offer would work. Regeneron has apparently already submitted an application to the FDA for emergency approval.  Although we have no confirmation that he is now testing negative, Trump is back to addressing herds of red caps, having no worries after transmitting or contracting the virus again.  He says that he feels great and is doing fine because now he is “immune” from COVID.  Again, words from a non-M.D. who continues to ignore medical experts, and the numerous studies to date on the unknowns about reinfection.

Climate change is real.  Scientists agree on what is causing our warming planet.  They have evidence that proves their methods showing the natural causes and human causes behind this crisis.   This is nothing new.  Climate change was initially recognized over 30-years ago and  has continued to be studied, monitored, and reported on regularly.

The Intergovernmental Panel on Climate Change (IPCC) Report, provides policy makers with regular scientific assessments on climate change, its implications and future risks, as well as presenting adaptation and mitigation options.  A consortium of scientific experts from 40 countries authored this Report which incorporated findings from over 6,000 scientific studies.  Its release made world wide news as it found that global warming is likely to reach 1.5°C by as soon as 2030 resulting in impacts previously thought to be triggered by only a 2 degree increase.  We will see increased sea level rise, earlier loss of Arctic sea ice, increased intensity and frequency of weather extremes, and damage to agriculture, forestry and other economic activities.

The Trump administration has no official position on the science underpinning climate change, although the president has stated several times that he believes climate change is a hoax.  Climate change is happening now, everywhere around us, and it is not a hoax.

The civil rights movement, which took place mainly during the 1950s and 1960s, was a social justice struggle for black Americans to gain equal rights under the law in the United States.  Slavery was abolished by the Civil War but that did not end discrimination against black people.  They continued to endure the devastating effects of racism, especially in the South. By the mid-20th century,  black people along with many white Americans, mobilized and began an unprecedented fight for equality that spanned two decades.  During this period, black Americans took on leadership roles, held public office, and sought legislative changes for equality and the right to vote.

White supremacists remain one of the deadliest threats to our country, yet, Trump – with millions of Americans watching, declined to condemn white supremacy.  Reminder, it is the year 2020, and this is the current president of our United States, how is this even possible?!

Trump instead blamed “Antifa” and the “left” for violence and further told the far-right Proud Boys to “stand back and stand by.” Days later he condemned these groups, sort of, but likely because his numbers were falling, his campaign manager had a panic attack, and he was forced to give in a lil bit.  Cold hard reality is that we have a racist president in our White House.  There are no words to describe what this man has done and is doing to the work that Rosa Parks, Martin Luther King, John Lewis, and so many others have fought so hard to eviscerate and transform.

MONSTER IN THE HOUSE

Webster’s definition of a “Monster” = a strange or horrible creature; an extremely wicked or cruel person.

Let me be clear, I am not nor have I ever criticized a person’s political or religious beliefs.  Our individual freedom of choice is a sacred and fundamental right that every single American citizen should proudly respect and honor.

What I am criticizing, is Donald John Trump personally.  He is a dangerous person in a position with way too much power.  He is pretending to lead our country, and pretending to care about all American people.  Trump is not concerned about the United States, he is instead consumed with his own self-absorbed personal interests and grandiose showmanship.  He has no interest in saving Americans from a pandemic, he has no interest in saving the planet, and he has no interest in abolishing racism.  There is unquestionably a Monster in the White House and it it terrifying!

Please VOTE! And when you do, think long and hard about your choice.  Think about your children, your grandchildren, (particularly the girls and women, the 45th is sexist too),  the future of our country, and of our very fragile planet.

We really can all make a difference, there is still time.  I encourage you to look beyond your party and look at this person, who has somehow cheated, lied, and made a deal with the devil (Putin), to worm his way into being Commander and Chief.  He has no understanding of how the real world works.  I remain hopeful this Monster of a leader will withdrawal to his deep dark cave and this nightmare will finally come to an end soon.

Enter your email to receive our regular blog posts and marketing tips in your inbox.